It's a pleasure to have Gordon Gekko slithering among his lesser capitalists once again, and Michael Douglas — one of those rare movie stars who, with each film in his recent career phase, have grown more and more interesting — turns the domestication of a very famous greedmonger into a source of amusement, pathos and genial duplicity.

The movie itself, just OK. But 'Wall Street: Money Never Sleeps,' director Oliver Stone's sequel to his 1987 melodrama, has its satisfactions, thanks mainly to a cast skillful enough to finesse what is effectively two films sharing the same screen. One concerns Gekko's comeback, after doing time for securities fraud and related crimes. The other is a romance involving a hotshot Wall Street trader played by Shia LaBeouf and his 'lefty Web site' lover and fiancee, Gekko's estranged daughter, played by the formidable British actress Carey Mulligan.

For more than two decades, Stone has professed astonishment at how the original 'Wall Street' turned Gekko into a sleek pop culture symbol, beloved, imitated, one-upped in real life by young bucks messing with other people's money everywhere. How much of Bud Fox (the original's Charlie Sheen character, who appears briefly here) do we remember from that film, really? He was little more than a narrative conduit to a seductively oily world. Gekko, thanks to Douglas' Oscar-winning turn, ruled that world, sucking skulls (or threatening to) all the livelong day.

The mood is different, more rueful in 'Wall Street 2.' The script by Allan Loeb, rewritten from earlier drafts turned in by Stephen Schiff, begins in October 2001 with Gekko's release from the pen. No one's there to pick him up after he collects his effects, which include 'one gold money clip with no money in it.'

But he has a gleam in his eye and money-making skills in his bones. His new book, 'Is Greed Good?' makes amends for his former rapaciousness. After a university lecture one day, Jake (LaBeouf) introduces himself as the legendary Gekko's future son-in-law. Gekko strings him along, feeding Jake valuable, dangerous information regarding enemies of Jake's mentor, the embattled scion played by Frank Langella. In return, Jake paves the way for Gekko's reunion with his daughter. Josh Brolin is the snakelike rival investment house guru, one of Gekko's old adversaries. In 'Platoon' terms, 'Wall Street 2' presents Jake with a good father figure (Langella), a bad one (Brolin) and the in-betweener with the name like a lizard.

Winnie oversees her progressive muckraking Web site ('Frozen Truth'), which is alleged to be a 'shoestring' organization, although when Stone gives us the establishing shot of the palatial loft filled with extras, it's like the rebirth of journalism. Why is she hanging around with a Wall Street slicko like Jake? Because he's an idealist who believes in alternative energy sources and the money they can generate. And he rides a motorbike. And there's something of her own slippery father in him.

This being a Stone picture, when someone sees something on television she doesn't like seeing, she doesn't merely turn off the TV via remote. She throws the remote across the room. Seasoned performers such as Langella and, as Jake's financially strapped real estate agent mother, Susan Sarandon, tear into their respective scenery-chewing stereotypes as though they haven't eaten in days. Yet there's an old-fashioned, slightly cheesy swagger to the picture that carries it to the two-thirds point, at which time the two competing pictures start having serious trouble being in the same frame.

Its success or failure in the marketplace, I suppose, will depend on how audiences will take this new, more 'approachable' Gekko. Certainly audiences should respond to the quality of Douglas' work. He overplays not a single moment, or look, or zinger. Douglas has been in the news lately for his battle with cancer, and that off-camera fact has a way of informing Douglas' on-camera achievement. I wish the film hadn't turned Gekko into such a sweetie; the script goes dangerously soft on its most valuable commodity. But a valuable commodity, in this market, can never be underestimated.

Has it really been 23 years since writer-director Oliver Stone and co-scripter Stanley Weiser first “released the Gekko” in Wall Street? Michael Douglas’ indelible portrayal of a ruthless, soulless corporate raider transformed the character of “Gordon Gekko” into the pop culture figurehead for the Decade of Excess. Gekko’s immortal credo-“Greed, for lack of a better word…is good”-became a mantra for self-absorbed yuppies and anathema to anti-corporate activists.

Of course, with Oliver Stone being the lib’rul, anti-‘Murcan, Chavez-lovin’ DFH filmmaker that he is, he wasn’t about to let Gekko get off scot-free for his veritable laundry list of highly profitable capitalist crimes. When we last saw him at the end of the 1987 film he was getting hauled away by the Feds, after being betrayed by his protégé (who learned from the best). It looked like the man who once admitted that “I create nothing…I own” was about to learn a new creative skill-how to make license plates.

The real world has since not only merged with Stone’s hellish vision of a financial system driven by the avarice and bemused gamesmanship of a handful of self-serving weasels who “create” nothing but bigger piles of personal treasure, but surpassed it. The real life Gekkos of the 80s, like Michael Milken and Ivan Boesky (who also ended up in handcuffs) have since been eclipsed by financial super villains like Bernie Madoff. And so it goes. 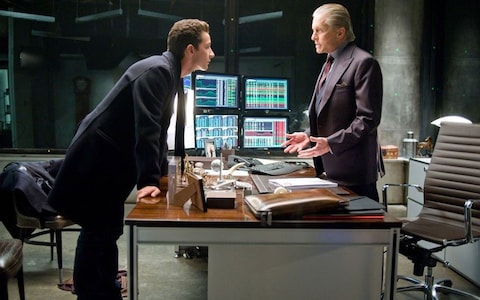 In view of current events (I assume) Stone and co-writers Allan Loeb and Stephen Schiff have seen fit to resurrect Gordon Gekko, in the new film Wall Street: Money Never Sleeps. In the prelude we catch up with Gekko in 2001, as he is being released from prison. Stone has a little fun with this sequence, especially as Gekko’s personal effects are summarily returned to him. “One gold money clip…no money,” says the poker-faced clerk. The biggest audience laugh in the film is prompted by a cameo of Gekko’s elephantine DynaTAC mobile phone, an amusing techno-relic from our not-so-distant past.

Fast-forward to 2008, on the eve of the Lehman Brothers collapse. Gekko is making a comfortable living (if not up to the standards to which he had been accustomed) on the lecture circuit, where he is plugging that inevitable memoir that every white collar crook publishes after getting out of prison. In the meantime, we are introduced to an up and coming young Wall Streeter named Jake (Shia LaBeouf) and his girlfriend Winnie (Carey Mulligan)-a liberal blogger who happens to be Gekko’s daughter. Winnie has disowned her father for years, blaming him for a family tragedy.

Unlike the recklessly ambitious young stockbroker played by Charlie Sheen in the previous film, Jake brings a certain amount of idealism to his work; he is trying to steer his employers (a group of investment bankers) toward putting capital into “green” projects (talk about lost causes). The only sympathetic ear belongs to his long-time mentor, Louis (Frank Langella) who is the managing director of the company. Louis is also a Wall Street rarity-a thoughtful man who actually seems to possess a heart and soul; you can glean why Jake looks up to him.

All bets are off, however, when the financial collapse of 2008 intervenes, and Jake’s employers feel themselves beginning to circle the drain. When Louis attempts to finagle a government bailout, he finds himself “Gekkoed” by an old rival, Bretton James (Josh Brolin), who buys out the company at pennies on the dollar.

Although he knows his girlfriend (and now fiancée) would not be pleased, the suddenly rudderless Jake, curious about his future father-in-law, introduces himself after attending one of Gekko’s public appearances. The two begin a cautious relationship, based on “trades”. Gekko wants to re-bond with Winnie; Jake wants to exact Machiavellian revenge on Bretton James. Of course, this is Gordon Gekko-so maybe he has his own Machiavellian plan brewing here.

Curiously, Stone has not so much made “Wall Street 2” here, but remade Godfather III. Gekko is at a point in his life not unlike that of Michael Corleone in the aforementioned film. He is older, his empire has crumbled, and the pull of the abyss is now more palpable than the lure of acquisition. Both characters are taking inventory of their past; and each man, in his own self-deluding fashion, is making atonement for his sins.

And Stone’s emphasis, as was Coppola’s, is on the family melodrama, not the family “business”. It’s about trust and betrayal. It’s about the father-daughter relationship. I could go on with the parallels (and point out that weirdly, Eli Wallach has a supporting role in both films), but at this point, you’re likely wondering about the most important consideration: does Stone tell an interesting story? Well, that depends on what you seek.

If you seek the Oliver Stone of Salvador, Talk Radio, and JFK– i.e., the passionate, angry prophet of the American cinema, denouncing the hypocrisy of our times, you might want to look elsewhere. Considering the potential he had here to be “bullish” and deliver a scathing, spleen-venting indictment of our royally fucked-up financial system, Stone is leaning more on the “bearish” side.

On the other hand, if you’re up for a slightly better-than-average family soaper (with a beautifully captured NYC backdrop by DP Rodrigo Prieto), then go for it. Douglas steals the show as Gekko. Langella is excellent. Brolin is suitably slimy as the villain. Also, it was fun to see Austin Pendleton (!) back on the big screen.

Not all of the casting works; Susan Sarandon’s formidable talents are wasted. As for the leading man-this was only my second exposure to LaBeouf (my first was when he hosted Saturday Night Live a while back, when I said to myself- “Shia who?”) so I’m ambivalent about his performance; it’s not “bad”-but not particularly noteworthy either. I hope that Stone (and know I am a fan) still has more great films in him down the road. It would be a lesser, more complacent universe where people felt compelled to say “Oliver who?”