“Treat the earth well: it was not given to you by your parents, it was loaned to you by your children. We do not inherit the Earth from our Ancestors, we borrow it from our Children.” ~American Indian Proverb 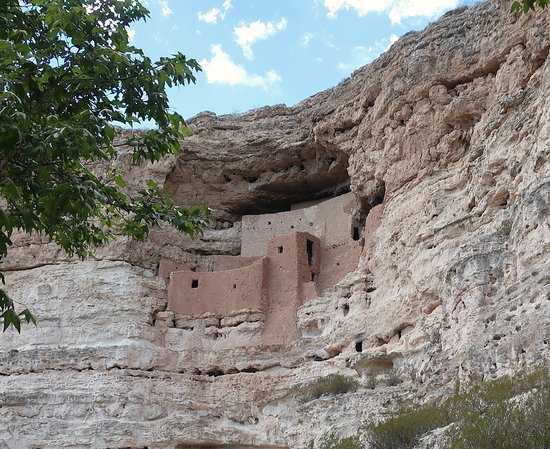 The arid American Southwest is world-renowned for its well-preserved archeological treasures, many of which can be found in Arizona. Indians have inhabited this region for thousands of years.

1. Canyon de Chelly National Monument – At the base of sheer red cliffs and in canyon caves are remains of American Indian villages built between A.D. 350 and 1300. Reflecting one of the longest continuously inhabited landscapes of North America, the cultural resources of Canyon de Chelly include distinctive architecture, artifacts, and rock art sites while exhibiting remarkable preservation integrity that provides outstanding opportunities for study and contemplation. All excursions into the canyons must be accompanied by an authorized park ranger or Navajo guide. Canyon de Chelly is unique among National Parks, as it is comprised entirely of Navajo Tribal Trust Land that also sustains a living community of Navajo people. The National Park Service works in partnership with the Navajo Nation to manage park resources. Canyon de Chelly is also known for its abundance of rock art sites which feature images created by both the Anasazi in prehistoric times and the Navajos in historic times.

2. Casa Grande Ruins National Monument – Casa Grande Ruins National Monument preserves an ancient Hohokam farming community and “Great House.” Created as the nation’s first archeological reserve in 1892, the site was declared a National Monument in 1918. One of the largest prehistoric structures ever built in North America, its purpose remains as much a mystery as the people who built it. Archeologists have discovered evidence of wide-scale irrigation farming and trade which lasted over a thousand years and ended about 1450. Today the ancient ones are remembered as the “Hohokam,” an O’odham word meaning “Those Who Are Gone.”

3. Homolovi Ruins State Park – During pre-Columbian times, Homolovi was a crossroads of trade along the Little Colorado River near what is now the town of Winslow. Homolovi, meaning “Place of the Little Hills,” is a sacred place to the Hopi people, and it was once home to the ancient Anasazi.

4. Montezuma Castle National Monument – A twenty-room five-story cliff dwelling, built by the Sinagua people who lived in this area for over 400 years, is nestled into a towering limestone cliff. Although very few original artifacts remained due to intensive looting of the site, the structure is one of the best preserved prehistoric cliff dwellings in North America. In 1951, the National Park Service closed off public access to the ancient cliff dwelling to prevent damage to the structure. A self-guided, 1/3-mile loop trail leads visitors below the cliff dwelling and through a beautiful sycamore grove along spring-fed Beaver Creek, one of only a few perennial streams in Arizona. There is a museum on the site as well as daily ranger talks. Montezuma Well, another part of Montezuma Castle National Monument, is located 11 miles from the cliff dwelling. Formed long ago by the collapse of a limestone cavern, a constant supply of fresh warm water provides an aquatic habitat like no other in the world, and has served as an oasis for wildlife and humans for thousands of years.

5. Navajo National Monument – Rangers guide visitors on tours of the cliff dwellings named Keet Seel (an 8-mile hike) and Betatakin (a 2.5 mile strenuous hike). Keet Seel is considered by many archaeological experts to be one of the best preserved larger ruins in the American Southwest. These cliff pueblos are so well preserved because they were built in protective alcoves. The structures were constructed mainly of sandstone blocks plastered together with mud and mortar. There were also a number of structures believed to be built at the base of the cliff. But without the protection of the over-hanging cliff wall, their exposure to the elements led to their destruction by erosion.

6. Pueblo Grande Museum and Archaeological Park – This park located in central Phoenix near Sky Harbor Airport preserves the remains of a 1,500-year-old Hohokam village. There is an interpretive trail as well as an onsite museum with three exhibit galleries and a theater featuring displays of the Hohokam and other cultures of the Southwest. The site also includes some of the last remaining intact Hohokam irrigation canals. Explore these prehistoric Hohokam Indian ruins, and let your children discover the excitement of archaeology in hands-on exhibits.

7. Tonto National Monument – Situated within rugged terrain in the northeastern part of the Sonoran Desert, these well-preserved cliff dwellings in shallow caves overlooking the Tonto Basin were occupied during the 13th, 14th, and early 15th centuries until about AD 1450. The people farmed in the Salt River Valley and supplemented their diet by hunting and gathering native wildlife and plants. They were fine craftsmen, producing some of the most exquisite polychrome pottery and intricately woven textiles to be found in the Southwest. Many of these objects are on display in the Visitor Center museum. The half-mile self-guided tour climbs 350 vertical feet to the Lower and Upper ruins (elevation 3,150 feet). This is a small park that’s not very heavily visited, so you can enjoy the walk amid lovely desert scenery while avoiding crowds most of the year. March is the busiest month because of the beautiful wildflower displays. However, due to active beehives, the cliff dwellings may sometimes be closed without notice.

8. Tuzigoot National Monument – Tuzigoot is an ancient pueblo village built by a culture known as the Sinagua. The Sinagua were agriculturalists with trade connections that spanned hundreds of miles. The pueblo consisted of 110 rooms including second and third story structures crowning a desert hilltop. The first buildings were built around A.D. 1000. The people left the area around 1400.

9. Walnut Canyon National Monument – Walk in the footsteps of people from long ago and peer into their homes built deep within the canyon walls. You will see 25 cliff dwelling rooms along the main trail, and more are visible across the canyon. The trail descends 185 vertical feet into the canyon, and returns the same way. There are some steep dropoffs and places without handrails, so keep kids close. Another trail overlooks but does not enter the canyon.