Note: These notes are preliminary and incomplete and they are not guaranteed to be free of errors. Please let me know if you find typos or other errors.

Up to now we have covered (1) the labor market and the production function, where real wages, employment and potential output is determined, and (2) the market for goods and services, where the real interest rate and investment and saving are determined. Now we consider the market for financial assets (money and 'bonds') by focusing on the demand and supply of money in the economy. This will give us insights into other forces on interest rates - particularly those created by the Fed - and also on the ultimate determinants of inflation.

In this class, when we talk about the nominal money supply we will generally be referring to the monetary aggregate M1. Hereafter, the symbol 'M' will denote M1.

The supply of money

The Federal Reserve Bank (Fed) ultimately controls the supply of money in the economy. (How it does this and how the banking system works is detailed in the lectures on the Fed and Monetary Policy.) The Fed is the central bank for the U.S. and is a quasi-private entity (technically owned by private banks) created by the Federal Reserve Act in 1913. There are twelve regional Federal Reserve Banks across the country and the leadership of the system is conducted by the Board of Governors of the Federal Reserve System (Federal Reserve Board ). The Board consists of seven governors, appointed by the President to staggered fourteen-year terms. The President appoints one Board member as chairman - currently Allen Greenspan - for a term of four years. It is important to keep in mind that the Fed operates independently of the federal government. Congress and the President do not have direct control over the operations of the Fed.

How the Fed Controls the Money Supply

Portfolio Allocation and the Demand for Assets 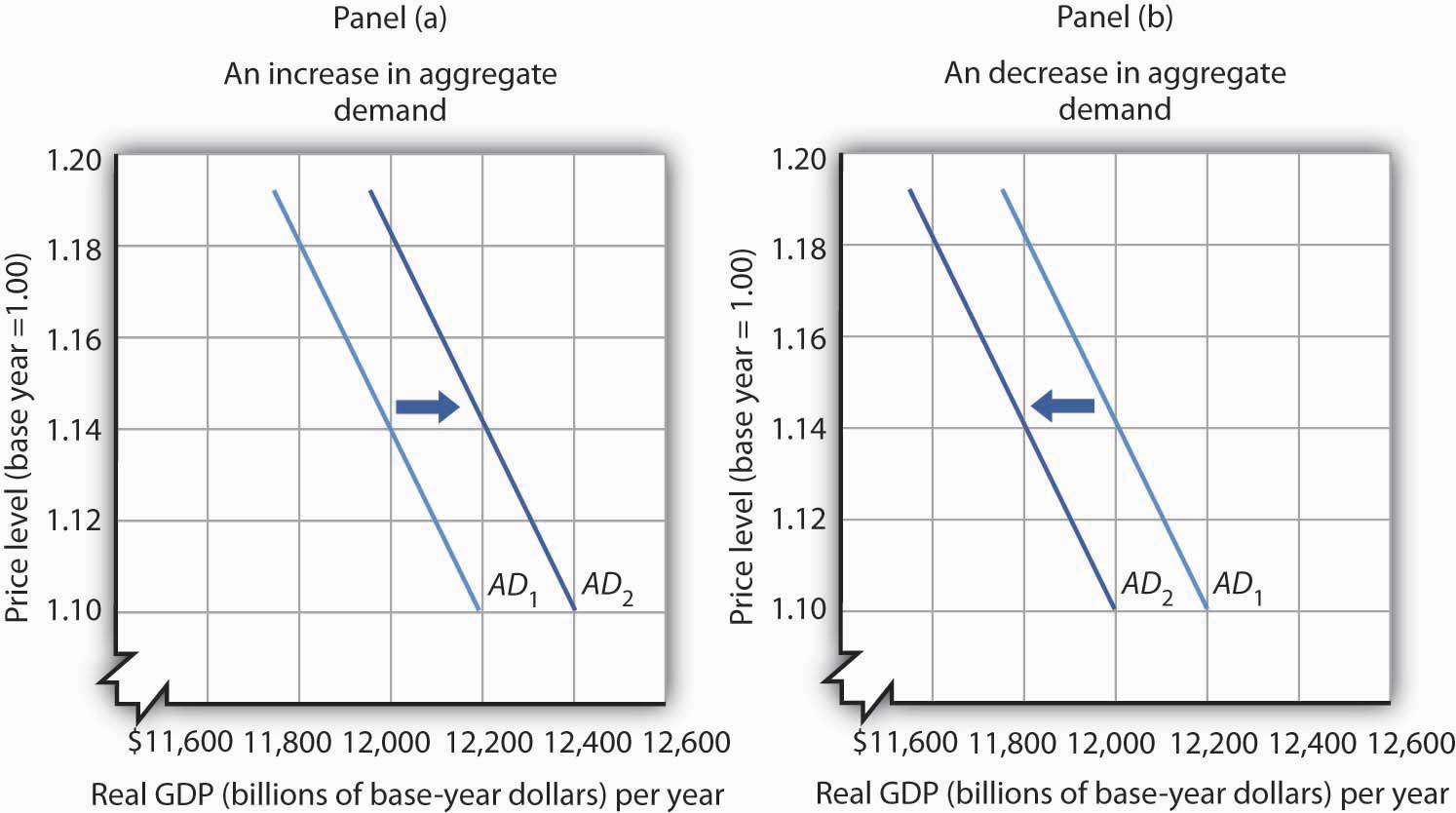 Portfolio theory tells us how individuals allocate their wealth among a number of financial assets (e.g. stocks, bonds, real estate, money). In general an individual's demand for assets is based on comparing the benefits of costs of holding different kinds of assets. These costs and benefits are functions of the following assets characteristics:

An individual's demand for money is then based on the costs and benefits of holding money. As an asset, money has a very low expected return (it pays no interest), is very safe (the gov't guarantees its nominal value) and is the most liquid asset.

Since the general asset allocation problem involves many different kinds of assets with different risk and return characteristics we simplify this decision by assuming that there are only two kinds of financial assets in the economy.

The demand for real balances

Since the demand for nominal balances is proportional to the aggregate price level, we can divide both sides of the nominal money demand equation by P. This gives the liquidity demand function or the demand for real balances function:

The real money demand function is graphed below: 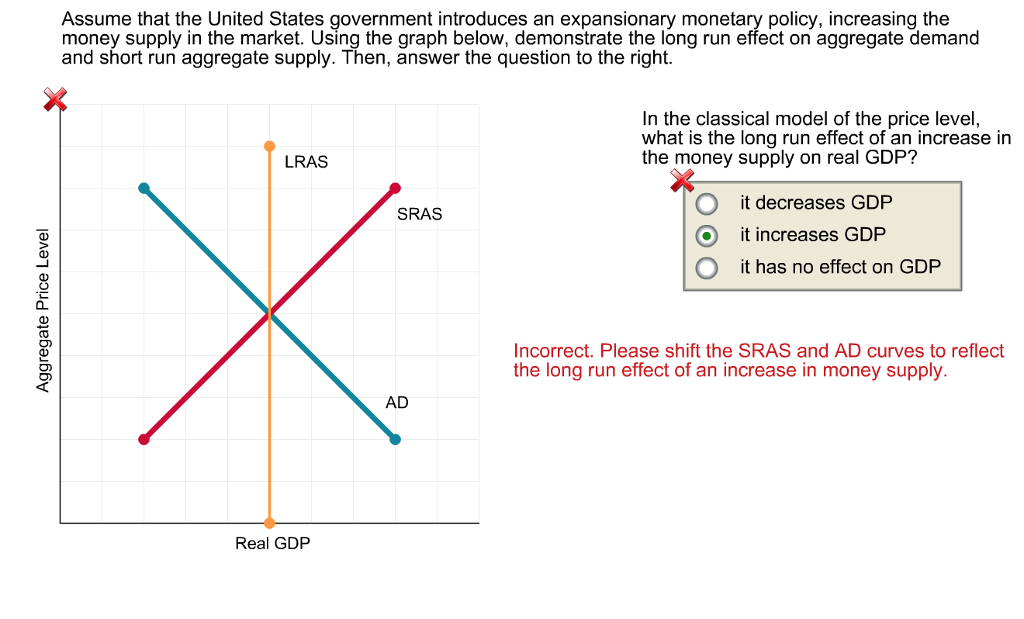 Equilibrium in the money market

Consider the money market initially in equilibrium at r = 6% as illustrated in the above graph.. Suppose the Fed increases the nominal money supply by an open market purchase of government bonds. This increases the money supply from M0 to M1. Holding the price level fixed, this increases the supply of real balances from M0/P0to M1/P0. If the real interest rate stays at 6% then the supply of real balances will be greater than the demand for real balances: there will be an excess supply of money in the money market. Consequently, individuals will try to get rid of the excess money by buying bonds which puts downward pressure on the real interest rate (holding expected inflation fixed). As r drops we move along the liquidity demand curve toward the new equilibrium at r = 5%.

Consider the money market initially in equilibrium at r = 6% described in the graph below. Now suppose that the aggregate price level increases from P0 to P1. Holding the nominal money supply fixed, this reduces the supply of real balances from M0/P0 to M0/P1. If the real interest rate stays at 6% the supply of real balances will be less than the demand for real balances: there will be an excess demand for money. The excess demand for money will prompt individuals to sell bonds (demand for bonds falls) and so the real interest rate on bonds will rise. As r rises, we move up along the liquidity demand curve toward the new equilibrium at r = 7%.

Consider the money market in equilibrium at r = 6% as illustrated above. Suppose that current income (Y), which is the same as current output (GDP),. Increases from Y0 to Y1. This increases the transactions demand for money as so the real money demand curve shifts up and to the right. If the real interest rate stays at 6% there will be an excess demand for money which puts upward pressure on the real interest rate. As r increases, we move along the money demand curve up towad the new equilibrium at r = 8%.

How Does An Increase In Real Gdp Affect Money Demand Will

The aggregate supply is the relationship between the quantity of real GDP supplied and the price level when all other influences on production plans (the money wage rate, the prices of other resources, and potential GDP) remain constant. The AS curve, as shown in Figure 6.1, is upward-sloping. This slope reflects that a higher price level, combined with a fixed money wage rate, lowers the real wage rate, thereby increasing the quantity of labor employed and, hence, increasing real GDP. The potential GDP line is vertical because it is moving along at both the price level rate and money wage rate, and money prices of other resources change by the same percentage. (20)

Why does the AS Curve Slope Upward?

What Shifts the Aggregate Supply?

The quantity of real GDP demanded is the sum of consumption expenditure ( C ), investment ( I ), government expenditures ( G ), and net exports ( X âˆ’ M ), or:

Why does the AD Curve Slope Downward?

There are three reasons for the negative relationship between the price level and the quantity of real GDP demanded:

What Shifts the Aggregate Demand?