Pages in category 'Start-Class amusement park articles'. The following 200 pages are in this category, out of approximately 1,505 total. This list may not reflect recent changes ( learn more ). (previous page) (.

Batman: The Ride is a 4D Free Spinroller coaster at two Six Flags parks in North America since 2015.[1][2] The coasters were designed by S&S - Sansei Technologies, along with Alan Schilke, with the track manufactured by Rocky Mountain Construction.[3]

As the name suggests, Batman: The Ride is themed to the DC Comics superhero, Batman.

After months of a teaser campaign for a 2015 attraction,[4] Batman: The Ride was officially announced for Six Flags Fiesta Texas on August 28, 2014.[5] The roller coaster replaced Motorama Turnpike, an original car ride that opened with the park in 1992.[6] Track for Batman: The Ride arrived in February 2015 with the construction of the site well underway for the installation.[7] The roller coaster was completed near the end of March of the same year before opening on May 23, 2015.[8]

Riders on Batman: The Ride will begin by climbing along a 120-foot vertical rise. Then zoom over hills while pivoting forward multiple times, before plummeting into a steep raven drop. Next, riders will subsequently change directions and get to enjoy a backwards flip, spinning backwards into another raven drop and then ending with a forward flip. The roller coaster uses an adjustable series of magnetic kickers to allow the cars to spin freely, based on factors such as gravity and rider weight in the cars. The park can adjust the degree of spin based on rider input, which will help them regulate the experience to average rider tolerance over time.[12][13] 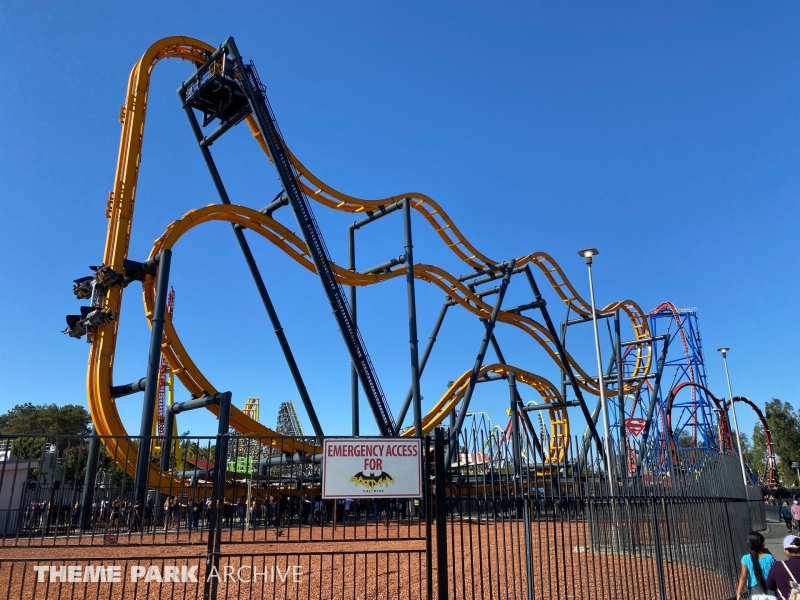 Batman: The Ride became one of the most anticipated roller coasters of 2015 due to the ride being the first of its kind in the world.[16] With some stating that the roller coaster may become the 'most intense' ever built.[17] The coaster has generally been well received by the media and park goers. Tim Baldwin of RollerCoaster! Magazine who gave the ride more than a few 'Bat-whirls' stated that 'you really don’t know what to expect' and 'it is just like summersaulting through the sky'.[18] Albert Salazar from San Antonio Current, didn't know what to expect as the roller coaster didn't look like any other roller coaster at the theme park as Batman offers a 'unique topsy-turvy experience.' After he and his co-workers disembarked the ride in surprise they were all in shock, with one stating 'What the hell just happened?' They then, 'wondered when we could get on it again.'[8]

With the success of Batman: The Ride and becoming 'an immediate fan favorite', Six Flags has spawned another version of the ride the following year at Six Flags Great Adventure as The Joker.[19] The company has built five more similar rides throughout North America including the coaster at Six Flags Discovery Kingdom.[20]

After Batman: The Ride's debut year in 2015, the roller coaster didn't receive any votes of the Amusement Today's Golden Ticket Awards for best new ride or any for the coaster to be a part of the top fifty steel roller coasters in the world of that year.[21]